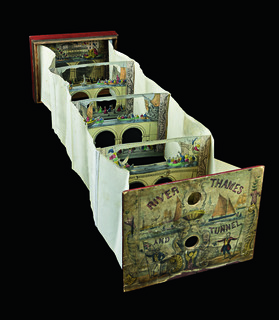 The world’s largest and most comprehensive collection of paper peepshows has been donated to the Victoria and Albert Museum (V&A) under the Cultural Gifts Scheme. The Scheme was introduced by the Government in 2013 as a major initiative to encourage life-time giving to UK public collections. This is the first gift under the scheme to be allocated to the V&A. The acceptance of these two collections will generate a tax reduction of £294,600.

Paper peepshows resemble a pocket-sized stage set, complete with backdrop and paper cut-out scenes, which expand to create an illusion of depth. The gift of over 360 paper peepshows, along with other optical wonders, spans nearly 300 years and 12 different countries. The collection was formed over 30 years by Jacqueline and Jonathan Gestetner and is now part of the V&A’s research collection, soon to be accessible in the reading rooms of the National Art Library.

Covering a wide range of subjects, the peepshows allow viewers the chance to join a vibrant masquerade, have a peek inside the Thames Tunnel or to follow Alice down the rabbit hole. Others commemorate historic events, such as the coronation of Queen Victoria or Napoleon’s invasion of Moscow in 1812. They come in many shapes and sizes and are printed or handmade. Some are no larger than a matchbox, while others expand to over two metres in length. First engineered in the 1820s from paper and cloth, peepshows became an inexpensive pastime for adults and children. Most commonly sold as souvenirs, they offered a glimpse into a choice of vistas, celebrating particular events, famous places or engineering feats.

Nearly two hundred years since their invention, paper peepshows continue to delight viewers with their ingenuity and visually arresting scenes. Culture and Digital Minister Matt Hancock said: "This rare and comprehensive collection highlights a historical form of entertainment that very few people will have seen before. It's wonderful news that thanks to the Cultural Gifts Scheme this collection will now be enjoyed by the wider public for years to come."

Dr Catherine Yvard, Special Collections Curator at the National Art Library, V&A, said: “This collection is a real treasure trove and makes a wonderful addition to our holdings, which focus particularly on the art of the book. Peeping into one of these tunnel-books is like stepping into another world, travelling through time and space. In an instant you can join Napoleon on the Island of St Helena or a rowdy masquerade on London’s Haymarket. Peepshows were 19th century virtual reality. They offer wonderful insights into social history. Considering that most of them would have been made quite cheaply, it is a miracle that so many have survived.”

Edward Harley, Chairman, Acceptance in Lieu Panel, said: “The acquisition of this important and enchanting material highlights the diverse range of objects accepted under the Cultural Gifts Scheme. The collection provides a rare and exciting opportunity for an under-represented area in visual culture to be understood, studied and enjoyed in the public domain.”

Mr and Mrs Gestetner said: “We are thrilled that, through the Cultural Gifts Scheme, our collection charting the origin of the paper peepshow from the 1820s to the present day, which has given us immense pleasure over the years, will now join the V&A’s collections where it can be enjoyed by many others and used for study purposes.”

Highlights from the collection include:

The collection will soon be available to search online on the National Art Library Catalogue and on ‘V&A Search the Collections’. Anyone wishing to access the peepshows can view them by appointment at the V&A’s National Art Library. This extensive collection is a well-documented resource, as a full illustrated catalogue was published in 2015 by the late Ralph Hyde (R. Hyde, Paper Peepshows: the Jacqueline & Jonathan Gestetner Collection, Woodbridge: Antique Collectors' Club, 2015).