Last year BPH reported that the historic Barnardo's archive, which includes historical photography of children dating back to the 1870s, was under threat (See: http://britishphotohistory.ning.com/profiles/blogs/barnardo-s-archi...). The plan was for the archive to be digitised after which it would either be destroyed or transferred to another institution. As you might expect this caused a major outcry and Barnardo's eventually backtracked to say that, as it no longer had the space to store the archive it would place it with another institution, An announcement would be made in the Spring [2014] - see image below.

In the interim a number of other archives and museums expressed an interest in acquiring it. 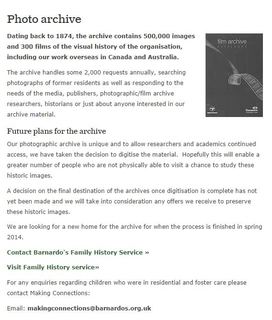 Spring 2014 came and went and no announcement was forthcoming. After repeated emails and telephone calls to Barnardo's press office BPH has finally secured an update. A press officer left a message to say that Barnardos had now found space to create a larger storage facility and it would be retaining the archive.

What that means for access by historians remains to be seen. If any photo-historian gains access to the material and would like to report back please do so.