Book: Ipswich: the Changing Face of the Town 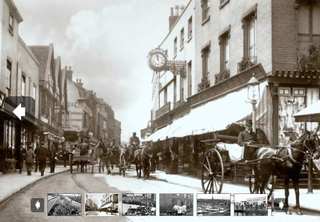 More than 300 evocative pictures of the past are in a new book by David Kindred called Ipswich: the Changing Face of the Town, which is being published this week. The oldest photographs date from the 1880s.

Other early pictures include high-quality images taken by Harry Walters, who worked in the town from the 1890s to 1926. Most of his photographs chronicle Queen Victoria’s diamond jubilee celebrations in 1897 and show the streets and buildings of Ipswich as they were at the turn of the century.

The publisher is Suffolk-based Old Pond priced at £19.95, and further details can be found here.

Photo: Tavern Street, Ipswich, in 1897, from a point near St Lawrence Lane and looking towards the Cornhill. Hatton Court is to the right