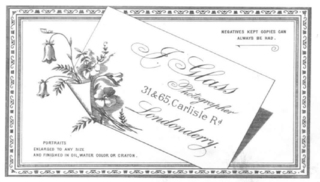 Explore the story of the 19th century Derry photographer, James Glass.  The exhibition includes some of his portrait images and his iconic images of Gweedore County Donegal, in the ‘Glass Album’.

Glass is often remembered for a unique series of photographs of the Gweedore and Cloughaneely areas, taken in the late nineteenth century.These photographs which have not been on display since they were first taken, are connected to the famous 1889 “Land War” trial of Fr McFadden and some of his parishioners following the killing of District Inspector Martin in Gweedore, Co. Donegal.

It is believed that James Glass was commissioned by the defence to take a series photographs depicting tenant life in Gweedore. These photographs subsequently became known as the Glass Album. This was the first use of photographs as evidence in an Irish court. There are two known copies of the Album – one in the collections of the National Museums of Northern Ireland, the other, belonging to a private collection, which on display for the first time in this exhibition,

The exhibition will be launched on Thursday at the Tower Museum at 7pm and will be open to the public until October 26. Admission is free. Further details can be found here and here and here too.

No worries, Noelle. That's what BPH is for!

Enjoy the exhibit, and do share your visit with us, if you can!