Francis Frith - On location with the BBC at Stirling Castle. 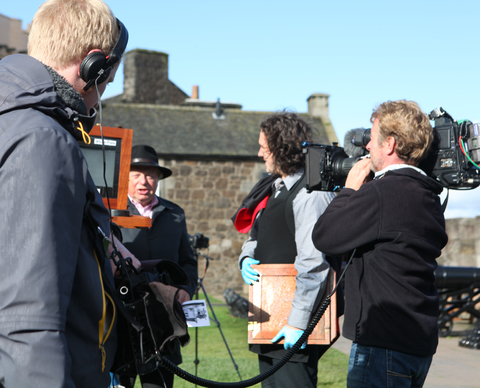 The Victorian photographer Francis Frith is chiefly remembered for the company he helped found in 1859 which embarked upon the daunting task of documenting every town and village across the UK. Working with a team of photographers Frith ran a photography studio which proved enormously successful, leaving an archive of several hundred thousand images. Frith himself was a prolific photographer, and his journeys across Egypt and the Middle East with his camera and team of helpers reveal a true craftsman who could create images of great quality in hot, dry and difficult conditions.

Earlier this year I was asked to contribute to a six part programme on Francis Frith which will air on the BBC in spring 2012. As a contemporary practitioner of the process Frith used (wet plate collodion) it was felt that I might be able to help explain to the host of the series, John Sergeant, some of the challenges facing the photographer.

Arriving early on a Sunday morning at the imposing gates of Stirling Castle, a fortress which sits on a rocky outcrop high above the town, Douglas Thomson, who would be assisting me with the days shooting, were greeted by the film crew. We then drove in convoy across the defensive moat, through the battlements, and up the steep winding road which leads to the heart of the castle, and began to unload an almost endless supply of chemicals, glass plates and the all important camera and darkbox.

Setting up the camera on the battlements, it was impressed upon us that our segment would be filmed shortly, and that we would only have time to make one test plate to test UV levels (unlike conventional photography wet plate uses UV light which cannot be metered using a standard handheld meter). Given that filming was taking part in late autumn in Scotland, a country not known for an abundance of sunshine, Douglas and I estimated a longer exposure than usual , and were shown an image made by a Frith Photographer in 1899 (coincidentally too late for wet plate) of the courtyard which they wanted us to make a modern view of.

Having made our test image (a tintype) the director and John quickly told me what they wanted me to talk about, remembering to keep it nontechnical and nonspecific because the audience might not be as passionate about alternative processes as I was.  We then quickly concluded the short interview segment, and the filming of the wet plate collodion process began. 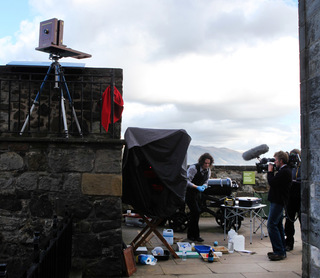 Normally a slow, methodical and thoughtful process,  I was urged that time was of the essence, and had to contend with a TV crew, John’s many questions, an audience of tourists, and my own nerves as I poured the collodion rather haphazardly onto the prepared glass plate.

After having spent several minutes in the darkbox with the plate in the silver bath, it wasn’t long until I was loading the sensitised plate into the camera. I then had to spend several minutes adjusting the camera which the public had been playing with while I was being interviewed– some curiously looking through the lens believing it to be a telescope, others bemused by its Victorian design. The plate was then exposed, and I rushed back to the darkbox to develop and wash the image, which appeared under the glow of the red lights. Emerging from the darkbox, I fixed the plate using KCN (Potassium Cyanide), revealing an image of the Great Hall which John seemed delighted with. Wrapping up the segment we talked briefly about the aesthetic and technical differences between digital and chemical photography, and John professed his enthusiasm for the process.

I look forward to when the show airs in February-March next year, and hope that the rest of the series is as interesting as the afternoon I spent making images in one of Scotland’s great buildings.

You can learn more about the programme 'Britain's First Photo Album' here. 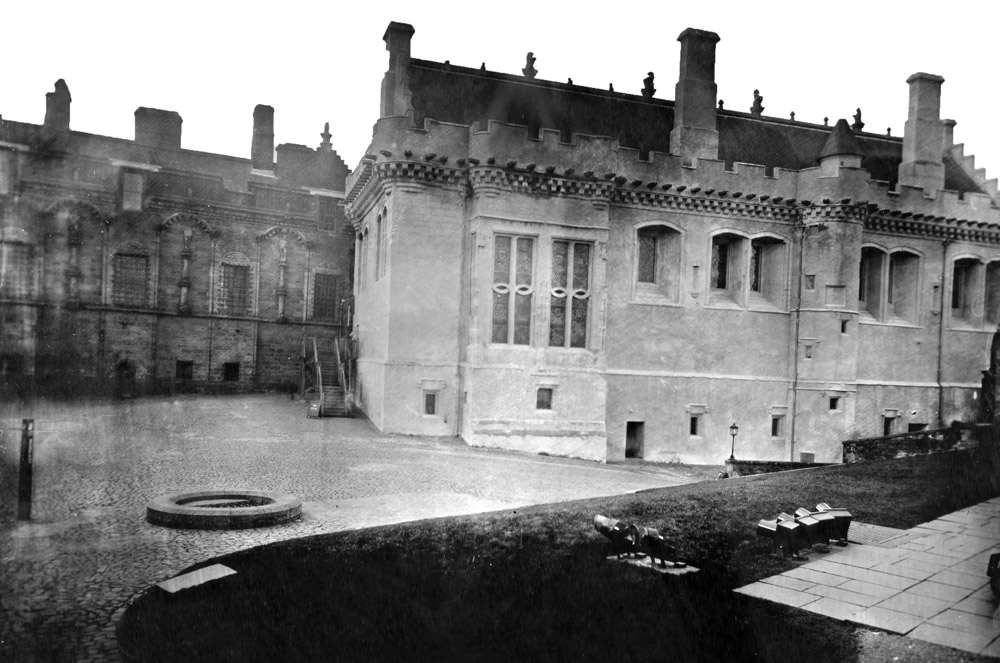 Above:  The glass plate positive (ambrotype) which was created for the programme. Note the sky has been inked out as per contemporary prints.

I look forward very much to seeing this. Co-incidentally; I'm just about to publish a book on part of the Frith & Co.  'Universal' series of Indian photographs, which were taken in 1869/70 in  Kulu & Spiti; by one of Frith's specially commissioned photographers. As far as I'm aware; these have never been published as an entire collection before.

Comment by Alex Boyd on November 3, 2011 at 21:12
I should add that much of this had to do with the TV production which called for an ambrotype as opposed to the more authentic negative.  Thanks for your input!

Comment by Alex Boyd on November 3, 2011 at 20:59
Luther - as pointed out this is an ambrotype as opposed to a negative. The sky has been removed to give a more 'authentic' period feel to the image, in keeping with plates contemporary to Frith.

Comment by luther D. Gerlach on November 3, 2011 at 20:56
If the sky was inked out it would be red or black.  The ambrotype  is a positive. On a neg to make a positive albumen print it could be inked out . Thank you Luther