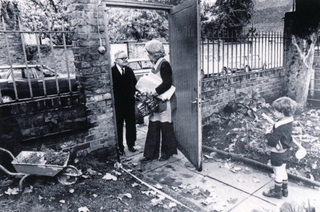 Although I didn’t fully realize it in Autumn 1981 when I was a member of the Missouri-London Reporting Team and a London Sunday Times Intern, one assignment I chose for myself (not part of the regular writing program, which was directed by John H. Whale) was to photograph a children’s day centre in Highbury/Canonbury, London, and Picture Post great Bert Hardy had also photographed a British children's day centre about 30 years before...writes David Joseph Marcou. I’d photograph Mr. Hardy memorably later in 1981.

I first obtained formal permission in writing from the District Education Authority. Margaret Johnson, I believe, was the day centre’s director. She was very helpful, as was her chief assistant, Gloria -- or was her name Gladys?

The timing for my coverage was in October or November 1981 or both. Although I wanted to show a composite day of activity there over the full month, including a dusk shot of it from the building next door (where George Orwell apparently once lived), I couldn’t get clearance from the man in charge of that next-door building to take the just-after-dark shot. Each time I visited the centre, I took pictures about an hour.

Children of all backgrounds attended the centre (one little girl wore a mink coat, but most of the centre's kids were from working class families). My favorite subjects may have been the great 3-year-old artist Demien, whose drawings adorned many areas inside the centre; and Lucy, a little girl reading (I was told an ancestor of hers was a famous evolutionist). Demien was Anglo-African, as was his friend Jonathan. I took facial shots of Demien, and the two friends together too, though I was asked not to identify any children if my photos of them were published at that time. My best portrait of Demien was my black-and-white picture-postcard image of him for my one-man photo show in Seoul’s Pine Hill Gallery and Restaurant in Feb. 1987.

Along the way, I also photographed a laundry attendant at her ironing board, and the teacher Elizabeth helping a little girl get her winter coat on, which indicates my assignment probably wrapped up in mid-November or so. In addition, I like my photo of two little girls kibbitzing on the centre’s back door steps as they put on their coats, the teacher/playwright Bob helping a little boy learn to swim on a day trip to a nearby indoor pool, and a little boy kissing his mom as she drops him off one morning (though I no longer have a copy of the latter image).

I also photographed a teacher tucking in a little girl for her nap, a little girl seeming to sneak out of recess (I thought a child sneaked out for recess, not out of it), and a little girl being walked into the kitchen area by Gloria. Other favorite photos are of a small group of kids eating breakfast as a teacher oversees things, and Gloria receiving newspapers, etc., from a shop deliveryman at one of the centre’s gates as a small boy with toy golf club looks on.

My second now-ex-wife seems to have pilfered many of my best early negatives and slides, including most of my day centre images; I’ve still got 50 or so day centre prints I believe. I’d taken about 15 rolls of 36-exposure Agfa color 400 ASA negative film, a couple rolls of 36-exposure Agfa color 400 ASA transparency film, and 1 or 2 rolls of Ilford black-and-white 400 ASA negative film. In Wisconsin later, I had at least the color negatives made into contact sheets, and sent one set (there may have been two sets, but I can’t recall that for sure) to Margaret Johnson. I never heard back from her, though.

One of my journalism housemates, now an attorney, Marynelle Hardee, asked me later what that children’s day centre shoot was all about. I hope it was about very good photography, and getting reacquainted with the child side of life for positive reasons. Readers/viewers can be the judge.

Photographing a London Children’s Day Centre for a Month in Autumn 1981, by David Joseph Marcou, Photographer and Author.