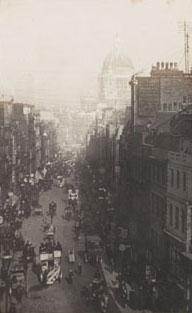 Bob Crow's PhD thesis on Walter Benington, who started working as a portrait photographer for London studio Elliott and Fry and was a member of the Linked Ring, is now available and can be read, or downloaded, from the University of Gloucestershire's research repository. The abstract is reproduced below and the link to download the full PhD thesis is here: http://eprints.glos.ac.uk/2996/

Abstract: Walter Benington (1872-1936) was a major British photographer, a member of the Linked Ring and a colleague of international figures such as F H Evans, Alfred Stieglitz, Edward Steichen and Alvin Langdon Coburn. He was also a noted portrait photographer whose sitters included Albert Einstein, Dame Ellen Terry, Sir Arthur Conan Doyle and many others. He is, however, rarely noted in current histories of photography. Beaumont Newhall’s 1937 exhibition Photography 1839-1937 at the Museum of Modern Art in New York is regarded by many respected critics as one of the foundation-stones of the writing of the history of photography. To establish photography as modern art, Newhall believed it was necessary to create a direct link between the master-works of the earliest photographers and the photographic work of his modernist contemporaries in the USA. He argued that any work which demonstrated intervention by the photographer such as the use of soft-focus lenses was a deviation from the direct path of photographic progress and must therefore be eliminated from the history of photography. A consequence of this was that he rejected much British photography as being “unphotographic” and dangerously irrelevant. Newhall’s writings inspired many other historians and have helped to perpetuate the neglect of an important period of British photography. As a result, the work of key photographers such as Walter Benington is now virtually unknown. Benington’s central involvement with the Linked Ring and his national and international exhibition successes demonstrate his significance within post-1890 British photography. Recent moves in the writing of histories of photography have called for the exploration of previously unknown archives and collections. A detailed examination of a cross-section of Benington’s work will illustrate that he was a photographer of great distinction and marked individuality fully worthy of a major reappraisal.