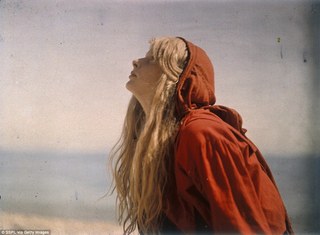 I like a research challenge so have had a look to see if I could help elucidate who Christine is. Mervyn Joseph Pius O'Gorman (birth indexed as Gorman) was born on 19 Dec 1871 in Brighton, Sussex. I've noticed some sites mentioning he was born in Ireland. I cannot locate him in the 1881 or 1891 censuses. He was educated at Downside (Somerset) and at University College in Dublin where he studied Classics and Science (from his obituary). As found by a genealogist on the rootschat.com (tinyurl.com/kp73z8t), a Christina O'Gorman, aged 3 in 1901 and aged 13 in 1911 appears in the Dungarvon, Co. Waterford censuses, daughter of James (b. c.1863-1866, Co. Waterford), a baker, and Mary O'Gorman. This Christine's birth is registered in Dungarvan in the Oct-Dec quarter of 1897. Mervyn was the son of Edmond./Edmund John Whyte O'Gorman.

It would be difficult to reconcile James O'Gorman of Dungarvan being say a brother to Mervyn, given the above and also their disparate places of birth and educational/occupational backgrounds. Cecil Crawford was a noted artist and mining engineer who emigrated to Mexico in 1895 and married a Mexican woman, having sons Edmundo, a writer, historian and philosopher and Juan, an architect and painter. The Wikipedia entry stating Cecil's father was Charles O'Gorman, the first British Consul to Mexico is wrong. His grandfather was Edmond Anthony O'Gorman (b. 1820, Clare, Ireland) and great grandfather was Michael Arthur O'Gorman. It was Michael's brother Charles Thaddeus O'Gorman (therefore a great great uncle) who was appointed British Consul General to Mexico in 1823 and Consul at Bahia in 1836. Cecil gives Mervyn's address of 21 Embankment Gardens, Chelsea as his intended address on a shipping record from 1926.

Mervyn O'Gorman married into a very wealthy family. His father in law Arthur Augustus Rasch, an underwriter and insurance broker had died in 1879 leaving an estate of under £100,000 with his second wife Emma (nee Corbett) as executor. Emma died in 1895 leaving an estate of £28276 with her daughter Florence Catherine Rash as executor. Florence was one of five children born to Arthur Rasch and his first wife Mary Letitia Warner. Her brothers Frederick Charles Louis Rash died in 1887 and Edward William Rasch died in 1888 and another brother Henry Augustus Rasch died in 1896. Her sister Mary Louis Rasch married William H. Byas, insurance broker in 1867. The ages and death dates of Florence Rasch's siblings make those that did have children too old to have been Christina's parent.

If you can follow all that, the upshot is I can't yet find Christina as a niece to Mervyn O'Gorman, unless she was the daughter of Bernadine O'Gorman of whom I (and others on line) have not yet found information.

Very impressive! I suppose there is no reason that 'Christina' has to be the real name of the girl in the picture...Plenty of artists and photographers give alternative names to their subjects...

I have been photographing my own daughter, who has similar long golden hair.

The story of Mervyn and Christina fascinates me also