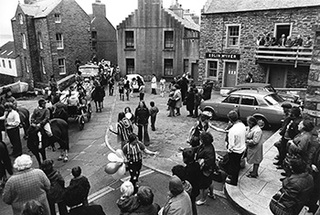 These three bodies of work from the late 1970s provide a unique insight into Scotlandʼs remote landscape, islands and people. Glyn Satterleyʼs series presents a document of life in the neglected area of Caithness and Sutherland at a time when the myth was much banded about that the oil industry brought wealth and prosperity to the whole of Scotland. Chick Chalmers ʻOrkneyʼ project and Tom Kiddʼs ʻShetlandʼ both present fascinating photographic insights of these island archipelago's at a time of change with the effects of the oil industry on the traditional life of these cultures. Candid and sympathetic, the images show that Scotlandʼs Far North managed to take its place in the modern world without losing too many of the customs and traditions which give these places their special character and ethos.

All three bodies of work appeared in a series by Paul Harris Publishing, an enterprising photography publisher based in Edinburgh at the time. These were Chick Chalmers 'Life in the Orkney Islands' (1979), Tom Kidd 'Life in Shetland' (1980), and Glyn Satterley 'Life in Caithness and Sutherland' (1983). It is from that basis that Street Level has revisited these projects to re-evaluate those times and places from the vantage point of the present. For the project, we have worked with Tom and Glyn in scanning and editing the original negs, and producing the prints in the exhibition. The works of Chick Chalmers in the exhibition are the original vintage prints made by the photographer and applying his distinct and detailed approach to the printing process.