In 1874 Dr. Barnardo opened a Photographic Department in his Stepney Boys' Home. Over the next thirty years every child who entered one of Barnardo's homes had their photograph taken. Children were photographed when they first arrived and again several months later after they had recovered from their experiences of living on the streets. The photographs were kept in albums and case-history sheets. There are over fifty thousand of these 'before' and 'after' cards, printed on a carte-de-visite, of the boys at the homes, and were then sold in packs of twenty for 5 shillings or singly for 6d. each. This enabled Barnardo to publicize his work and raise money for his charitable work.

However, Barnardo was accused of setting up the pictures in a court case in 1877. He admitted to not always using a child who was destitute as a model and sometimes exaggerating their appearances to get across the "wider" truth about the class of children he wanted to help. The courts reprimanded him but said his homes were still "real and valuable charities".

The case was so important because the status of photography was, at the time, a medium by which some kind of visual "truth" was supposed to be revealed. The idea that Barnardo had staged many of his photographs destabilised a Victorian notion of what it was to be an "authentically" poor child. A deliberately manipulated photograph of a child was considered not just an assault on notions of representational truth, but also an assault on the innocence of the child itself.

Well, you can judge for yourself at a talk entitled "Barnardo's Philanthropy and Photography" - see Events for more information. 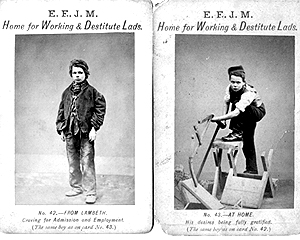 Carte-de-visite :The transformation
Pictures from the 1870s used by Barnardo's homes to attract funds,
ostensibly showing children "before" and "after" being rescued from the
streets. Barnardo was later accused of setting up the pictures in a
court case in 1877.