Some months ago while browsing the net I came upon several photographs attributed to Thomas Begbie; I recognised several of these photographs as ones which I held in my collection. This led me to the Capital Collections website of Edinburgh Council libraries and museums where I recognised several further images which I own. I then acquired a copy of the 1992 book Thomas Begbie's Edinburgh - a Mid-Victorian Portrait by Joe Rock and again there were further photographs illustrated that I own. However in every case the photographs that I recognised were original Victorian stereographs by Alexander McGlashon.

It was immediately apparent that the dating of the photographs, mostly stereographs, on the Capital Collections site was generally incorrect. The images are mostly dated 1887 on the site but many of these were advertised for sale by McGlashon in 1858 in Menzies Magazine. This dating problem can be verified additionally in some instances from physical features in the photographs; for example a view of Princes Street in Edinburgh from the Scott Monument shows Campbell’s North British Hotel which was still trading as such in 1857 but by 1858 had become Wilson’s North British Hotel. Similarly a stereo of the Covenanters Tomb in Greyfriars Churchyard is dated 1887; however the stereograph which I own, in addition to bearing the McGlashon name, has on the right hand margin the embossed stamp of the Edinburgh Stereographic Co of New York, which operated in the late 1850s. Capital Collections incorrectly dates these and other images to 1887.

Begbie was born in the first half of 1841 making him age 16/17 when these stereos were taken. Oddly there are few contemporary references to him. Indeed a detailed search of the online British Newspaper Archive failed to produce any references to him. Begbie did run a studio from his house in Leith Street from 1874 – 1881 but from the lack of any other recorded photographic activities it is reasonable to assume that he was not particularly successful as a photographer. Indeed I am struck by lack of surviving photos bearing the Begbie name and in particular I have not seen any Victorian stereoviews with his name on them. By contrast the contemporary press confirms the active photographic involvement of McGlashon - he photographed many well known individuals;  he lectured on the theory and practice of photography in the Edinburgh Institute; he was a council member of the Edinburgh Photographic Society whose meetings he on occasion chaired and he also gave talks to them on photographic subjects; he was involved in photographic projects with Octavius Hill including exhibiting at the London International exhibition in 1862.

If these stereo plates were ever in the possession of Begbie, and there is no clear evidence that they were, I would suggest that the most likely scenario was that he purchased them from McGlashon with a view to reusing them, but that his business never grew sufficiently for him to make use of them. Bearing on mind that these plates were discovered in St James Square, Edinburgh in 1950 it may also be relevant that at the time of his death in 1877 the McGlashon business was based in St James Square and his daughter lived in a further address in that Square which she still owned at the time of her death in 1919.

In the introductory pages of the book by Joe Rock there is clear and I believe well founded scepticism that the youthful Begbie could have been the photographer. I have recently corresponded with Joe on this subject and he has confirmed that he has always been sceptical of the attribution of these photographs to Begbie; as he stated in the book “on balance we must accept Begbie as the author until more evidence should prove otherwise” – I think that the required evidence is now available that the photographs are by Alexander McGlashon and should be recognised as such.

Thanks for putting up this photograph and sorry for delay in acknowledging - I have just returned from holiday. I agree that this looks like it has come from the 130 Princes Street McGlashon studio - I have several photos taken in this location and certainly he was at that address until at least 1867, so that would tie in with the 1866 date. I agree that this must certainly be the Moderator. Very interesting!

I have only very recently found another "Begbie" and McGlashon connection that I did not know before. In the collection left with me by Stanley Cavaye in 1986/7 there was one, very remarkable glass plate measuring 12" x 10". It was a portrait annotated on the margin of the plate "Cook of Haddington". I am pretty certain this is Rev. Dr. John Cook of Haddington (1807-1874) who became the Moderator of the Church of Scotland in 1866, when I guess the portrait was made.

I could't find any indication of the photographer until a few days ago when I suddenly realised the background is exactly the same as in a McGlashon portrait of Patrick Mulloch in the NGS made in August 1864. Same curtain but more specifically, exactly the same architrave with the square indentation at the top. 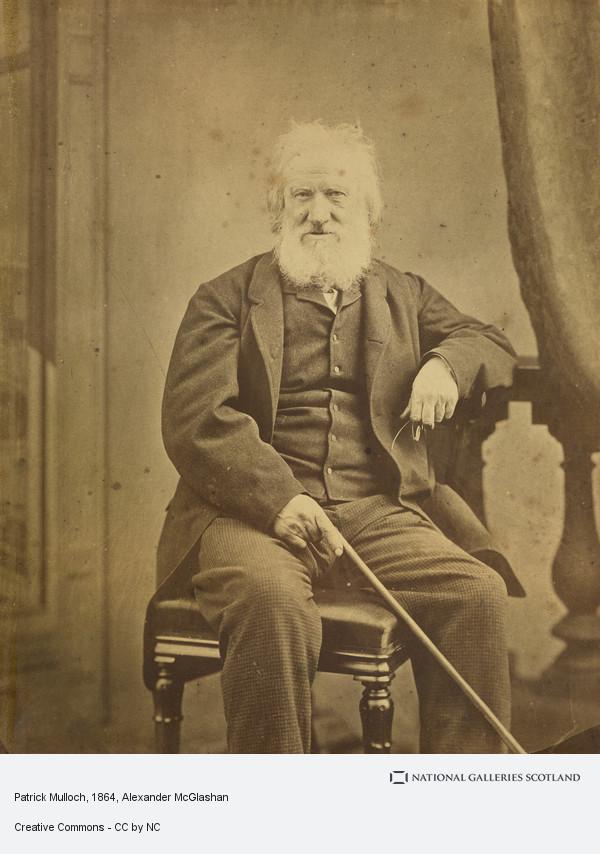 The evidence is growing but I think the living relative evidence still has to be addressed. I have three McGlashon stereos all from the late 1850s which have the Edinburgh Stereographic stamp on them and the 337 Broadway address. These stereos are in the usual McGlashon format with a pink descriptive label on the reverse bearing the McGlashon name. I am aware that this company also produced American views as four can be found on the J. Paul Getty Museum website. Sadly information on this company is almost non existent suggesting that it was a relatively short lived venture, probably set up as a retail agency or outlet for "exotic" Scottish views with some American ones added to try to expand the portfolio and hence potential market. I share your frustration at the elusive nature of this company!

I have been trying to find out more about the Edinburgh Stereographic Company with little luck so far - have you any insights?