Born to a family of lapidaries (precious stone merchants) in 1840 in Edinburgh, Thomas Begbie only took up photography in the late 1850s before becoming a member of the Edinburgh Photographic Society in 1867. He set up a professional photography studio at 7 Leith Street (now the site of the St James Centre), and appeared in trade directories from 1874, advertising himself as a professional photographer from 1879-1881.

Begbie travelled all over the city to chronicle what he saw – from the Port of Leith and Newhaven with its fishwives and schooners docked onto the cobblestone quayside, to John Knox's house with a group of scruffy urchins outside, to Princes Street when Waverley Station was still under construction.

The Cavaye Collection of glass negatives by Begbie was discovered in a house in St James' Square in 1950, and is currently held at the City Art Centre. They cover a wide range of subjects, most notably Edinburgh's Old Town, but also the coastal communities of Leith, Granton and Newhaven and further afield such as Roslin and Stirling. Some of the photos in the collection pre-date the first record of his studio (in the 1880s) and it seems that Begbie was a teenager when he took them, which is quite extraordinary.

Now you can view some of Begbie's intimate images of Edinburgh in an exhibition here, and a news article here.

It is worth noting that Alexander McGlashon was in Australia specifically to take photographs and this included stereoviews. It is highly likely that he took the stereoview technique with him to Australia and that he had already been producing them in Edinburgh. Also he had already been producing portraits; for example the Eastman Gallery hold two portraits dated 1854 of an individual who died in 1855. These two images were included in the Brumby Johnston album intended to show the best in contemporary photography, so clearly McGlashon's photographic ability was acknowledged by contemporaries.

His printing businesses in both Edinburgh and London would have ensured that he had sufficient money to set up as a photographer but I believe that it is likely that photography was his main interest. Thus he lectured on the theory and practice of photography in Edinburgh and was a council member of the Edinburgh Photographic Society.

By contrast I have struggled to find contemporary references to Begbie, other than when he operated his own studio in the 1870s. Even then, despite scouring auction lists, I have yet to find a Begbie image for sale. It would be good if we we could. find out more about this somewhat elusive figure, including who he worked for and when.

I have been looking at some of the evidence discussed here and I think it is probably impossible to say exactly who made the stereographs attributed to both Thomas V. Begbie and Alexander McGlashon. The 1858 list of 172 stereographs said to be by McGlashon, of images made in Edinburgh and many places outside it, is extraordinarily impressive for a man who had only just returned from Australia the year before. This is especially so if his main business was copperplate printing. I suspect McGlashon was a publisher of sterographs, made by himself and others. In a tradition that stretched back through the entire 18th century, he would have been quite happy and entitled to add his name to plates, or in this case, photographs, that he did not make himself.

Of the 172 McGlashon sterographs listed I can identify very roughly 50-60 for which there are negatives in the Cavaye collection of 450 negatives. Among those not listed are some very sophisticated images, made by a clever photographer. In one case the photograph was made from Begbie's house, looking out a window, in another, it shows the tenement in Leith Street in which Begbie lived. There are others which were taken within a five minute walk.

It would be incorrect to say that Begbie only began work in the 1870's. He is listed in the 1861 census, aged 20 as a "Photographer", living in lodgings at 121 Rose Street. This is a very confident statement and it could be that Begbie was working with a camera from age 15, supplying negatives for someone like McGlashon, who had the facilities to print them and the finance to publish them.

It is worth adding to Alex Sinclair's comment, that there is documentary evidence from members of Begbie's family that the images in the albums in the Edinburgh Public Library, were made by him. Most of these are from the stereo pairs in the Cavaye Collection. As I said in a lecture in 1990 during the exhibition at the City Art Centre, Edinburgh and in the Begbie book in 1992, it is quite possible that some of the stereo pairs were indeed by McGlashon. I attach one of my favourite images - the brig Henrietta and Leonard Preston lying in Leith harbour, after 1856 (when she was built at Stockton on Tees). 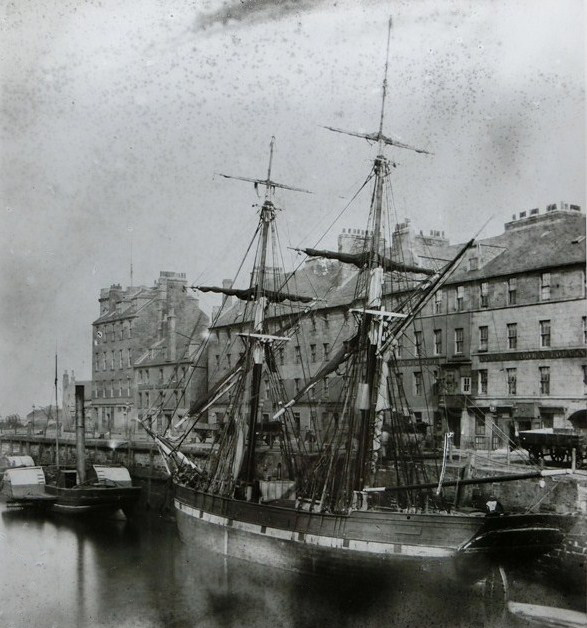 I have recently been looking at Begbie in some detail since noticing several photos attributed to him of which I own Victorian originals, all bearing the name of Alexander McGlashon. It is easily demonstrated, that many of the photographs, mostly stereoviews, in the Cavaye collection are much earlier than the dates ascribed to them; typically many are dated 1887 but can be shown to be approximately thirty years earlier than this. In the 1857/58 period when they were taken McGlashon, unlike the teenage Begbie, was already an established Edinburgh photographer with portraits and stereoviews from earlier in the decade held in several museums.

The glass plates discovered in St James Square, where incidentally McGlashon's business was based at the time of his death in 1877,  is I believe clearly the photographic archive of the stereoviews of Alexander McGlashon.