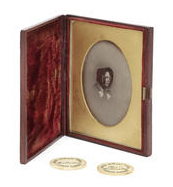 The portrait first came to light in 1996, discovered in an antique camera shop in Canterbury. Initially believed to be an image of Charles Dickens's sister, leading scholars soon identified the sitter as the writer's wife, Catherine (née Hogarth).

The earliest date for the portrait can be given as 1852 from the patent date 'Reg July 20 1852' on the catch of the morocco-bound case. Indeed surviving letters of Charles Dickens reveal that he sat for Mayall in 1852 and a daguerreotype portrait of the novelist, dated 1853-55, was sold at auction in London in 2001. It is possible that the couple visited Mayall's studio together during this period and that the two portraits were intended as a pair.

This daguerreotype was discovered with two ivory passes for the 1870 Italian Opera inside its case, which will be offered here alongside the photograph. One is inscribed 'Miss Dickens', suggesting that the daguerreotype might once have belonged to the couple's eldest daughter Mary, known as Mamie. In 1870 Dickens rented a house in Hyde Park Gardens, in part so that Mamie could experience the delights of the London Season.

Coincidentally, in the same auction, is an 1867 portrait by Julia Margaret Cameron (1815-1879) of Valentine Prinsep, with whom, it is believed, Charles Dickens's youngest daughter, Kate, had a love affair. Both Valentine, who was the son of Cameron's sister, Sarah, and Kate were artists and mixed in the same circles.