BBC TV - Rogers Fenton and Taylor on The One Show 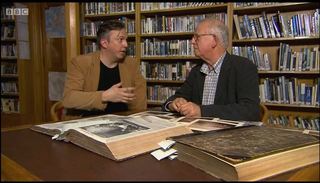 BBC TV's The One Show last night, 3 February 2014, had a five minute slot discussing the war photography and work of Roger Fenton.

It was introduced and presented by photographer Giles Duley who was injured in Afghanistan in 2011 after he stepped on an IED losing three limbs. Taking part was Professor Roger Taylor and the curator of Stonyhurst College which holds more than 100 original Fenton albumen prints.

At the end of the sequence, in the studio, modern wet-collodion photographer Tony Richards helped a presenter make a collodion plate.

The segment begins at 23m 01s,and Roger comes in at 24m 47s. It ends at 29m 17s. Giles Duley is presenting a public lecture talking about his career and work in Bath on 13 February. Tickets are available here.

The One Show programme is available on the BBC iPlayer for the next seven days here: 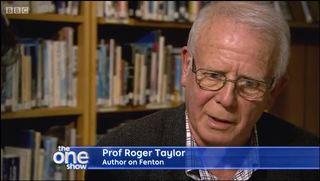 Thanks for the edit Michael.

Also Jo (The presenter's) test plate was really good but was of the researcher and runner, when it came to him taking a proper plate of Alex and Matt he panicked a little with the dev stage and totally missed her head!