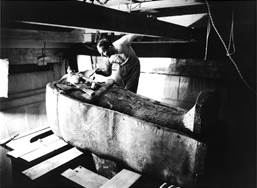 BBC Four invites audiences to share in a celebration of British Photography with Britain in Focus, a season of programmes exploring the UK through the lens. The BBC are looking for photo-fanatics to submit their own photographic memories for a documentary looking at the family photograph and the story of the cameras which defined each generation's favourite family snapshots.

Are your shelves groaning under the weight of countless family photo albums? Has your family captured each generation's story on the cameras of the day, from Box Brownies to Polaroids, Kodak Instamatic to the latest digital cameras?

If so then the BBC needs you. Smile! The Nation's Family Album will tell the unique story of family life in Britain from the 1950s to the modern day, focusing on the cameras that shaped home photography, and the people that used them. BBC Four are looking for families of photo-fanatics - ideally three generations of snappers – to dig deep into their treasured photo collections and share their most precious memories and family images to become part of the story.

Also in the season, Margaret Mountford and contemporary photographer Harry Cory Wright will discover The Man Who Shot Tutankhamun as they recreate the techniques of pioneering British photographer Harry Burton who captured the mysteries of ancient Egypt as it was excavated, in a unique look at how some of the most iconic images of the 1920s in the early days of photographic experimentation were created.

And from the gold heads of the Pharaohs through to the gold-plated Lamborghinis of Knightsbridge, BBC Four will accompany award-winning street photographer Dougie Wallace as he documents the lives of the superrich on the streets of London’s most exclusive postcodes. The documentary will follow Wallace capturing off-guard images of the wealthy on the streets of SW1, for his photo-documentary series, 'Harrodsburg', a powerful portrait of the ultra-affluent new elite, changing the face of the city and marginalising traditional local communities.

Leading photographer and picture editor Eamonn McCabe will tell the remarkable story of Britain in Focus: A Photographic History. From the delicacy of Julia Margaret Cameron through to the satire of Martin Parr, McCabe will look behind the lens to find out more about the artists and technology responsible for some of the most iconic images in British history and how a new generation of Instagrammers will shape our future attitudes towards photography.

Photographers at the BBC will take audiences inside the unique photographic treasure chest of the BBC’s archive, where the lives of top photographers from Norman Parkinson to David Bailey, Eve Arnold and Jane Bown have been brought to mainstream attention through classic programmes like Face to Face and Omnibus.

Cassian Harrison, BBC Four said: “Photography has been one of the most exciting, vibrant and transformational art-forms of the last 1,000 years – putting the tools of creation into the hands of anyone with explosive effect. Across this season of programming BBC4 will explore photography’s fantastic world with all the channel’s customary expertise and depth, unpacking both its history and relevance in exciting new ways and through the eyes of some of its greatest practitioners.”

Details of how to submit images for inclusion in Smile! The Nation's Family Album and to find out how to apply can be found at bbc.co.uk/familyalbum

Programme Information (transmission times to be confirmed, but spring 2017)

In today's digital age, the classic family photo album has become an object of nostalgic affection. But its more than just a collection of sentimental snapshots. Celebrating everyday moments and shared experiences - from birthdays to weddings, first days at school to teenage parties - amateur photography offers an intimate portrait of Britain’s post-war social history. And each generation had a different camera to tell their story.

From Teddy Boys in photo booths to family holidays captured on Kodachrome, this film reveals the images and the cameras which preserved our most precious memories. Discovering how new technologies and evolving social attitudes inspired the nation to pick up a camera, the film charts a journey from the Box Brownie to Instagram, offering a touching portrait of our changing lives, taken not by the professional photographer but on our own cameras.

The Man Who Shot Tutankhamun (w/t)

This is the story of Harry Burton, one of the great heroes of British photography. As the official photographer for Howard Carter’s Tutankhamun excavation during the 1920s, Burton created some of the 20th Century’s most famous images and helped make Tutankhamun an international sensation.

The film explores key locations in Burton’s life, in the UK and Egypt, and sets Burton’s famous black-and-white images of Howard Carter’s Tutankhamun excavation alongside forgotten colour photographs and cine film shot by Burton himself. The team led by Margaret Mountford and contemporary photographer Harry Cory Wright will also stage creative photographic experiments to discover the secrets of Burton’s art, re-creating the make-shift studio and dark-room that Burton set up by the Pharaoh’s tomb to reveal how he produced his iconic images.

Burton immortalised some of the most iconic moments of the 20th century, and besides recording the progress of the archaeology, his images capture the mystery, drama and excitement of one of the great archaeological discoveries of the century.

Britain in Focus: A Photographic History

Photographer Eamonn McCabe explores the fascinating and remarkable story of British photography, from the rapid innovation of Roger Fenton in the Golden Age of the 19th century, to the satirical eye of Martin Parr in the 21st. He explores the profound technical and scientific changes that have allowed iconic images to be produced, chronicles the rise of a mass democracy of picture taking, and examines the changing way we have consumed photographs.

Throughout this three-part documentary series McCabe explores how the art form has developed, exploring some of the unforgettable images from icons and pioneers of British photography, including  Julia Margaret Cameron, Fay Godwin, Cecil Beaton, Christina Broom, John Bulmer and Vanley Burke. From the first “big bangs” of photographic development and early technology, through to the impact that captured images had on the development of journalism, photography emerged as both an art-form and a tool for reflecting and recording the world around us.

The programme will also look forward to the future of the medium - and how in the hands of a new generation of photographers, a thoroughly 21st century British photography is being created.

Photographers at the BBC (w/t)

Using the BBC archive, this programme reveals the working practices, lives and opinions of some of the 20th century’s most distinguished photographers. From Norman Parkinson to David Bailey, Eve Arnold to Jane Bown, for decades the BBC has drawn the nation’s attention to the creators of what has become the most ubiquitous contemporary art form. Pioneering BBC programmes like Monitor, Face to Face and Omnibus provide unique and rarely-seen insights into the careers of many leading practitioners.

Through a selection of top photographers, the programme brings into focus the key genres (fashion, portraiture, documentary and landscape) and shows how these talented figures helped develop photography into a revered – and accessible – art form.

What Do Artists Do All Day: Dougie Wallace

Street photographer Dougie Wallace’s startling and eye-catching images capture the life of the inhabitants and visitors to the super-rich residential and retail district of Knightsbridge and Chelsea, with its solid gold-plated Bugatti’s and high end retail consumerism.

BBC Four follows Wallace as he finishes his exhilarating, headline-grabbing photography photo-documentary series ‘Harrodsburg’: an up-close wealth safari capturing the ultra-rich consumers who populate one of the UKs most wealthy and exclusive postcodes.

The recent winner of a Magnum Award for his work, Dougie's images are aggressive, confrontational and opinionated.  But he is unrepentant about his methods, and his message: “They come here because the rule is they can do whatever they want. Well, the rule of law in the UK says that I can photograph them. I’m just showing the wealthy, I’m taking pictures of them to highlight things like food banks in Glasgow.”