John Ruskin: Photographer and Draughtsman is the first museum exhibition to explore how the new medium of photography played a pivotal role in the evolution of this leading Victorian’s influential thinking. Bringing together daguerreotypes (unique copper photographic plates) –rarely on public display – with related drawings and watercolours, the exhibition shows how Ruskin used photography to build his understanding of landscape and architecture from which developed an entire philosophy of life that resonated throughout Victorian Britain and beyond.

John Ruskin (1819 – 1900) is generally considered to be one of the greatest of Victorian cultural figures, the most influential writer on art in the English language 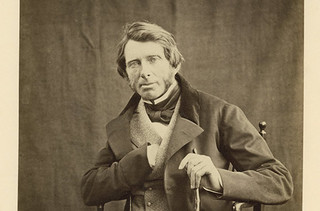 and an admired draughtsman and watercolourist. It was as a high-minded tourist that Ruskin became a passionate advocate of photography – “a noble invention” as he called it. First commissioning professionals to make images for him, and then later learning to create them himself, Ruskin assembled a substantial archive of daguerrotypes in the 1840s and 1850s.

The exhibition at Watts Gallery shows the photographs alongside the beautiful watercolours which were based upon them, together with some of the book illustrations which formed a further link in the chains of imagery which Ruskin developed using his daguerreotypes as a basis. Visitors are able to see the process whereby Ruskin’s philosophy of ‘truth to nature’ was both rooted in the traditions of Fine Art but also took full advantage of the latest visual technologies.

This exhibition showcases many of the important works held in the Ruskin Library collection at Lancaster University.