From your cousins across the Atlantic, I read of an early photography specialist dealer of 19th and early 20th century photographs from New York, Hans P. Kraus Jr, who for a recent exhibition has painstakingly created an entire room evocative of the ancestral home of William Henry Fox Talbot. There’s a replica of the photographer’s Lacock Abbey oriel window from one of his early images. It has a false bay window with a misty view of a gnarly old tree outdoors copied from a photograph that Fox Talbot shot from one of his windows ! - see photo.

On loan are objects from the 12th-century Wiltshire home, including Talbot’s evanescent 1839 Roofline of Lacock Abbey. It's $400,000 for the image, which measures about 4 inches by 5 inches. Another photo of St. Mary’s Church is tagged at $350,000, telling of its scarcity. A glass-top case displays the print from which the tree in the window was copied; a color chart made by Fox Talbot; and a book of pressed botanical specimens that his mother collected, identified and dated - memorabilia borrowed from Lacock Abbey. 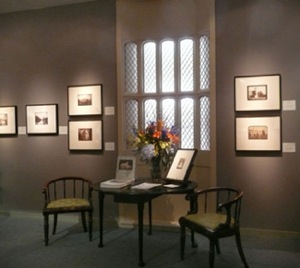