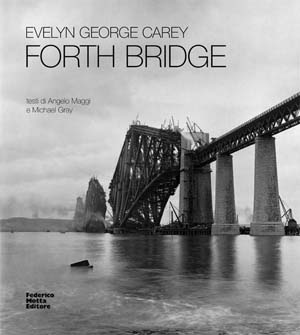 "The building of the Forth Bridge was marked and controlled through photography; the official photographer: Evelyn George Carey, a young engineer and personal assistant to the designer, Benjamin Baker worked on the project over a period of eight years between 1882 to 1890. His pictures capture, clearly and lyrically, the scale, tensions and inherent dangers of such a project."

"In a sense, the scale and importance of Carey’s achievement has yet to be fully appreciated. The body of work created by this young engineer-photographer between 1882 and 1890 as an employee of Fowler & Baker stands as an exemplar for all photographers working within this increasingly complex ever evolving domain. The photographs are pre-eminently sequential, tracing and recording the progress of the bridge’s construction, with an informed and critical eye. According to Patrizio, “Carey’s photographs are the visual expression of a very particular engineering ambition which is fully understood by the photographer.” The later, modernist fascination with such structures may be understood through a study of his series as a whole; the Forth Bridge shows, in Michael Baxandall’s terms, ‘a kind of expressive functionalism’ "