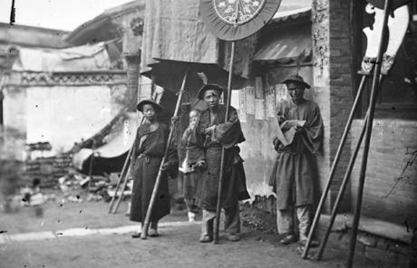 The Beijing World Art Museum is hosting an exhibition of photographs of China taken by John Thomson from the archives of the Wellcome Institute in London... reports the Daily Telegraph newspaper. It will be shown in Liverpool early in 2010. Taken between 1870 and 1871 by the Scottish photographer John Thomson, the images reveal with often startling intimacy a cast of characters from orphans and street gamblers, to beautiful peasant girls and their high-born ladies.

Hailed as a pioneer of photojournalism, Thomson spent two years travelling more than 5,000 miles in pursuit of the images that historians say are unique in their empathy towards their subjects As well as shooting traditional, stiff-backed portraits of Manchu noblemen, Thomson plied the streets in search of scenes that would bring the exotic world of China to life for a curious public back in England.

"These pictures are fascinating because they reveal a world that most artists of that period ignored," said Betty Yao, who has organised the exhibition that opens in Beijing next week. "Most material from this late Qing era is stuffy, formal and posed, but Thomson's work is full of life."

What is doubly remarkable, added Mrs Yao, was that Thomson captured such intimate moments while using cumbersome equipment and glass-plate negatives that needed to be coated with emulsion before exposure.

"He was the original photojournalist, and he used incredible persistence and hard work to get precisely the pictures he wanted. He never gave up," she said.

Among the images that testify to that persistence is a rare picture of a woman's bare, bound foot. Thomson later admitted, in perhaps an early example of "chequebook journalism", that he had paid the woman "handsomely" to expose her withered foot.

In other pictures, Thomson captured the sorry inmates of a "foundling" hospital where orphaned children were offered for free to "respectable people", and a public street slide-show where the public could see images from exotic and faraway places often to gasps of amazement.

When he returned to London, Thomson used his pictures to illustrate talks and lectures of his own, which earned him the moniker "China" Thomson.

An early herald of globalisation, Thomson recognised that the days of China's isolation from the world were passing, observing that "through the agency of steam and telegraphy, [China] is being brought day by day into closer relationship with ourselves".

Shortly before he died in 1921, Thomson offered to sell his glass negatives to Henry Wellcome, the pharmacist-philanthropist and keen collector, and it is from the archives of the Wellcome Library in London that the images have been taken, many to be exhibited in public for the first time.

The full report can be found here.