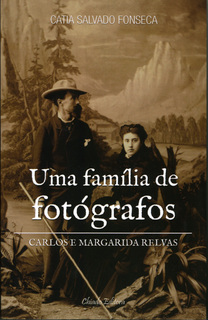 Carlos Relvas (1838-1894) is the best know among 19th Century Portuguese amateur photographers’, he was a very healthy farmer from the Ribatejo region and built his unique “Casa da Fotografia” is his hometown Golegã  (http://www.casarelvas.com/ ; ). In the not too rich panorama of Portuguese photo history he has already been the subject of a few writings[1], his studio house, a very interesting 19th Century iron building, was subject of major works and his now a museum.

The last published, and most likely the deepest study is Uma Família de Fotógrafos, Carlos e Margarida Relvas, written, as a MA thesis by Cátia Salvado Fonseca, and published by Chiado Editora. In his writing Cátia Fonseca underlines, for the first time, the work of Carlos Relvas daughter, Margarida Relvas, justifying the title of the book. In the past there was even the idea that Margarida Relvas name was only used as vehicle to the presentation of photographs in contests and exhibitions. In this book Margarida Relvas (1867-1930) is clearly treated as an independent author, sometimes even opposed to Carlos Relvas, however without the importance of her father. The author emphasizes differences between the work of father and daughter. Treating Margarida Relvas as a separate author allows the author to approach upper class female education, socialization and culture, including photography as a part of it.

Carlos Relvas was an amateur whose work covered most fields for 19th Century photography. The better known are the portraits, quite similar to portraits made at the same time by professional studio photographers, his subjects range from peasants to the Royal Family.  Some photographs represented ethnic types with Portuguese folk costumes; however these are mostly studio acted photographs using his employees, friend and himself. His passion for horses and bullfights produced another large number of photographs. And there are of course the usual landscapes and countryside scenes, many of Ribatejo, where he lived. Photographing art works may not be considered too creative, but was an important and highly regarded branch of 19th century photography, even for an amateur, Carlos Relvas made an important work on this area. He had the kind of photographic output only attainable to the very wealthy, using all the latest materials and processes, but also having a paid worker to help him with photography.

Relvas was highly regarded among European 19th century photographers participating in exhibitions and contests, he was also rather well known in Portugal with publications on the most important Portuguese press of his time. However his work remains unknown internationally, and does not even get a footnote on Histories of Photography.

His studio/house is built as it were a professional studio, with a waiting room, and a studio with the greatest possibilities of natural light control. It is a magnificent ironworks building, now working as a museum, a drive of just over an hour from Lisbon.

Cátia Salvado Fonseca works at Casa Museu Carlos Relvas and has a deep knowledge of Relvas work, his documentation and library. Relvas negatives were restored over a long period; unfortunately many of them were lost. Her experience is really unique, as “Casa Museu Carlos Relvas” besides the negatives still keeps Relvas cameras, as well as his darkroom. This is a wonderful visit, as well as a blessing to the researcher.

With such a comprehensive work, spanning for three decades, published in the most influential Portuguese press, Relvas photographs are a good way of understanding Portuguese landowning bourgeoisie, as well as a general view of what were the picture worthy subjects. Portuguese royal family with almost any member being an amateur photographer may be also an interesting case study.

This new book is a good way to be aware of the work of the family Relvas. It is not as abundantly illustrated as the 2003 catalogue, but it is certainly more comprehensive on Carlos and Margarida Relvas work.