Photography in the "Sixties" by William Strudwick

Few of the process workers of to-day can remember the year 1860, and those who remember it were not then process workers – they must have been nestling in their mothers’ arms, or filled with a laudable ambition to form correct pothooks and hangers at the school desk, or perchance they were still in the dark room undeveloped. Besides, at that time there were no processes to work in the way we understand to-day. At most a method of surface printing in the nature of lithography was practised, and that only by Government, probably. If my recollection be correct, there were no metal relief blocks with a photographic basis of any kind. Wonderful strides have been made since then, and the progress of a century has been pressed into thirty-five years.

But the main purpose of these few lines (and they must be few in deference to a hint from Mr. Editor) is to give, in a sketchy way, to the younger workers of to-day some idea of the difference in the labor of making negatives (especially out-of-doors) between then and now. At that time the Frena-ite and the Kodak-ite were not in the land, and no gelatine plates as we have them now. There were a few collodion dry plates introduced by Fothergill and Dr. Hill Norris – slow and not sure. I can remember exposing them for a quarter of an hour or more on outdoor subjects, with passable results. But the work that “took it out of you,” as the saying is, was the manipulation of large wet plates away from the studio, and the carrying (of) all the necessary paraphernalia into the field with you. Then (sic) were the days of the silver bath and immediate development of the exposed plate. None of your exposures at the other side of the globe and development at home six months afterwards. My experience was with 12 x 10 plates - that was my size if I may so say. Consider the requirements: a certain number of plates, each weighing about a pound a large containing bath, often made of gutta percha for lightness, for the silver solution, which had a provoking way of oozing out of the bath at the so-called tight-top, and getting into places where it was not wanted; a bottle of collodion, the stopper of which had a nasty habit of flying out in hot weather (experience taught me to prefer corks), and several bottles, not too small, for developers, fixing solution etc. Then there was the large camera - mine went down flat like an opera-hat, and for long journeys was packed into a leather case - and, of course, the tripod stand.

Another absolute necessity in the then condition of things was to provide a dark room at the scene of operations, or to carry a dark tent with you. Who uses a dark tent now? Who even hears of one? On arriving where the pictures were to be taken, if a country house, as it frequently was, the first duty was to perambulate its lower regions or outbuildings to find a suitable place for developing. Many and various have they been - coal-cellars, beer-cellars, pantries, cupboards under-stairs, water closets, harness rooms, stable boxes, stoke-holes (prenez garde la duste), wood sheds, etc., etc., in some of which places much engineering was required to keep out the daylight. When it fell to my lot to have a room with a regular window, I covered it up with a yellow blind, always carried with the apparatus and often used as stuffing to keep the bottles and other things steady when packed. Such a contrivance would he utterly useless for filtering the light in working the plates now used. In places where there was no window an ordinary candle gave the necessary light - another item now out of the question. At the mention of candles I am reminded of a little incident that might have grown into a great event. I was engaged at a large warehouse in Queen Victoria Street, City, and had to make a dark room of a cupboard under the stairs - it was a receptacle for waste paper and other odds and ends - there was none too much room, and I found it necessary to work in a kneeling position. I had just coated a 12 x 10 plate with collodion, when suddenly I was startled with a sheet of flame burning in front of my face; the vapour of the collodion had come too near the candle, and the whole plate was ablaze a la snapdragon. Fortunately I kept hold of the plate, and with vigorous blowing I put out the flame. I felt a little hot myself also, and when I had cooled down a bit I started a fresh plate.

About 1861 or 2 I was one day called upon to go to France to take some views. I think it was required that I should start the next day, and naturally I was much exercised in mind as to the most convenient way of transporting the impedimenta. The camera was provided for by its leather-case, and the tripod was nothing to speak of, but the silver bath, plates and bottles demanded serious consideration. I resolved to have a special carrying box, and set to work in the evening to construct one, measuring about twenty-four by twenty by ten inches with divisions for the various items and grooved space for plates. I made it to open at top and also in front, and covered it with canvas, which, after well sizing, I painted with quick drying black. Lastly, I fitted long straps all round it both ways, which served as a good handle for carrying. It needed a little enthusiasm to do this, for I had to sit up the whole night to get through the work, but by breakfast time it was ready - rather more so than I was. I had the satisfaction afterwards of finding it most useful. It has travelled thousands of miles with me since that time, including another journey to France; and, having a sort of affection for it. I still keep it - although it has become obsolete and has not been used for many years. Moreover, I have been occupied with the pencil more than the camera. This same box was the innocent cause of a ludicrous accident. Returning from a one day photographic expedition, I had arrived at my railway station near home, and left the box and camera to be brought on by the private porter. He strapped them together and slung them over his shoulder, the black box at the back. In due time he delivered them, and went away with his usual fee. Next day, however, he appeared again without being sent for. He carried an elongated face, and over his arm, a pair of new nankeen trousers, which be exhibited to me with an air of martyrdom. All down the back from the waist to the heels they were covered with long chocolate colored stripes. He was puzzled but I knew what was the matter. It was that tight top bath, which had been running over, and the silver solution dribbling out at the bottom of the box. I comforted him with the assurance that I could make the trousers all right, and cyanide did the rest.

In subsequent years I gave a good deal of time to taking photographs in the streets of London. Many incidents occurred in connection with this work, which, if related now, would read us ancient history, but I am afraid my space is already exhausted. The picturesque character of some parts of London (there are not so many now) had long been present to my mind. I found a good number of subjects in Old Lambeth between Westminster and Vauxhall. One of the illustrations, which, with some others all reduced from 12 x 10 negatives, have been so ably produced by the Swan Electric Engraving Company, shows Bishop’s Walk, then the principal thoroughfare (pedestrian) between Westminster Bridge and Lambeth Palace. This was such a picturesque bit of old London, that a word or two of explanation may be acceptable. The wall an the left was the boundary of the Archbishop of Canterbury’s grounds. The houses, no doubt, once upon a time, were residences of the leading inhabitants, but at the time the view was taken (1866) were mostly used for trade purposes. There was a picture frame maker, a boathouse and letting place belonging to Searle, a firm of barge builders, etc. Immediately beyond the distant houses one came upon the open river and Lambeth Palace. The other illustration is a view of St. Paul’s and Queenhithe from Southwark Bridge. For this, I went to the point of view three or four times before I found the atmosphere sufficiently clear. Let those who may be interested notice the difference in the same view to-day. I made a large number of pictures of this class, the negatives of which I still have, but they have been very little seen. In this work I was assisted very much by a large dark tent or house on wheels (a home-made one). It had a boarded floor and carried all the working plant, and was large enough for me to stand upright in, with ample elbow room. (Pardon a parenthesis. As I write these words the clock strikes twelve, and 1895 has gone to join the majority and is now in company with the Year One—I doubt if this earth will see 6,000 years more.) This dark tent was drawn by a man, and on arriving at a given point. I could have a plate ready in ten minutes. There is a history attached to this carriage, but I cannot go into it here. It was finally sold at Stevens’s Sale Rooms, Covent Garden, for, I think, fourteen shillings. 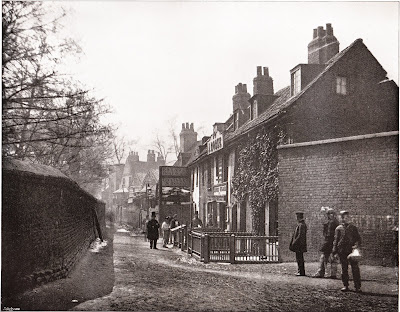 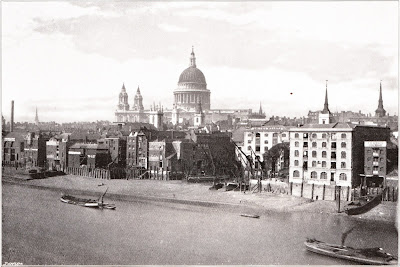 Who shall say what the next fifty years shall bring forth in photography and its surroundings? Arguing from what has been to what may be, the results that to-day are reasonably and really wonderful, may be totally eclipsed by facts which we dare not now think of.

The few lines of the above concluding paragraph have been quickly justified by the newest phase of photography. We have been more or less startled with photographs of the “unseen” skeleton hands, unopened purses with money in them, transparent frogs, etc. By the way, how frequently froggy takes a part in scientific enquiry - he is continually being made an assistant demonstrator in one branch or another. Will life be worth living when we shall be able to see through one another so readily? It occurs to me to suggest a new line of photographic business. Let the photographer advertise: “Hearts photographed by the New Light,” so that when a young man declares his affection, the lady may invoke the aid of photographs to help her to see if his heart be true. As a secondary item of advertisement may be added “Sweethearts taken as usual any afternoon or by appointment.”