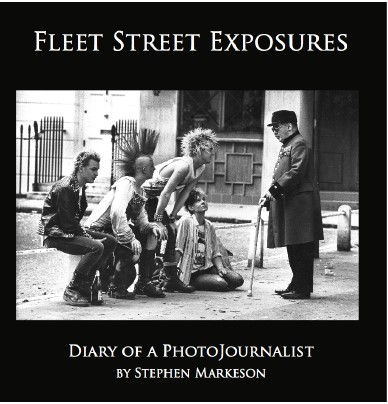 This book tells the story of Stephen Markson who rose from messenger boy at The Times to the top of his profession as senior staff photojournalist for that paper. The book tells the stories behind the pictures, images and anecdotes that give a tantalising glimpse of the danger and glamour, tragedy and celebrity, seen through the lens of a talented photographer for whom every day was different and every frame counted.

Stephen has compiled an intriguing collection of stories and images from the golden era of Fleet Street, when budgets were limitless, deadlines were tight and getting the film from the camera to the darkroom was often a challenge in itself. His determination saw him and his resourcefulness is apparent in many of the notes that accompany his iconic photographs.

His life was far from ordinary, with experiences ranging from being shadowed by the KGB and threatened by the IRA to hoodwinking Maggie Thatcher and dancing with Elton John. The book will appeal to anyone with an interest in recent history, journalism or photography and particularly in the drama and atmosphere of images shot on black and white film.