Publication: How films were made and shown 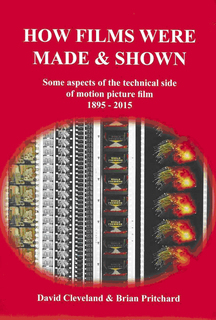 This is new book that looks at the developments of motion picture film technology from a British perspective between 1895 to 2015. Renowned film historian Kevin Brownlow says: 'the book is not only unputdownable - it's heavy enough to be unpickupable!' The book will be of interest to film archivists and those interested in the technical side of film and includes chapters on How It Worked; The Film Business Gets Going; The 1920s - Time of Change; A Quest For Colour; The 1930s and 40s; New Film, New Colour, New Sound, New Screens of the 1950s and 60s; The Film Laboratory, and Slow Fade Out covering from the 1970s to 2015.

The chapters cover the very first cameras and projectors and how they worked; the development of equipment for both professional and amateur film making; colour and sound; Kodak and other manufacturer’s motion picture film stocks; how film was developed and printed at the laboratory; and cinema, non-theatric and home projection.

How Films Were Made and Shown

David Cleveland and Brian Pritchard (no relation!)
453 pages, over 900 illustrations
Price: £45 including delivery in UK, for overseas delivery, please email: brian@brianpritchard.com
and remit by Paypal to brianrpritchard@aol.com

See more about the book here. and a flyer can be downloaded here..