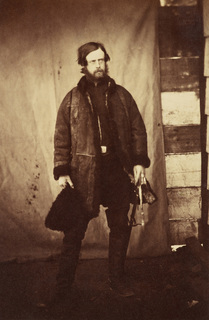 This portrait (below) shows Captain Alexander Leslie-Melville (1831-57), known as Lord Balgonie. He was the eldest son of the 8th Earl of Leven, a Scottish peer. Lord Balgonie served in the Grenadier Guards during the war, and died only a couple of years after returning to Britain. At the time, his death was attributed to the hardships of the war. Fenton has photographed him standing in front of a sheet, which serves as a make-shift studio and he looks unkempt and shaken, as if he has recently stepped off the battlefield. In recent years, this photograph has been described as the first photographic portrait of shell-shock. From the collection of the Prince of Wales, later King Edward VII.

Fenton's photographs are most successful when he has a personal connection to the subject matter, whether it be portrait or landscape. In other words, when he is not constructing or documenting as representation, but attempting to capture the spirit of person/place.

With regard to his landscapes of the Crimea the same feelings can be observed. One is the representational urge, the other the artistic. The first problem is the barrenness of the landscape and what to do with the inevitable horizon line. When photographing people in the landscape Fenton makes use of low depth of field either pulling the figures towards the front of the image ('Sir John Miller Adye (1819-1900)' 1855, and 'General Scarlett and Colonel Low Apr 1855') or the mid-distance (such as 'Captain and Mrs Duberly Apr 1855' and 'Colonel Doherty and the Officers of the 13th Light Dragoons 1855') whilst allowing the horizon line to float in the distance, either placed through the figures or floating above them. This low depth of field allows the horizon line to soften and the solid space around the figures to become ambiguous and fluid. It also allows the light in this vast expanse of country to do its duty, to illuminate the isolation of these figures "in the field." A similar technique was used by Edward S. Curtis when photographing the Native American Indians against the vastness of country - low depth of field, letting the light and composition do the work as subject is located - or vanishes - into the landscape. ...

Taken a mere 15 years after the birth year of practical photography, Fenton's "subtle and poetic interpretations" still resonate today. That he captured such acclaimed images using a heavy land camera, the photographs taken sometimes under fire, the glass plates prepared and developed in a 'travelling darkroom' - his horse drawn photographic van - make Fenton's achievement all the more remarkable. The shadow of war that he captured, the presence of the men, women and landscapes of that time and place, are made alive to us today.

Photographs remind us
of people, passing
They distill an essence
which
in turn
Instills in us
memory of time, place, spirit

APOLOGIES I GOT THIS COMPLETELY WRONG - THE EXHIBITION STARTS 9 NOVEMBER 2018! AT LEAST IT IS UP THERE...

READ THE FULL REVIEW AND SEE THE IMAGES AT https://wp.me/pn2J2-9Ie