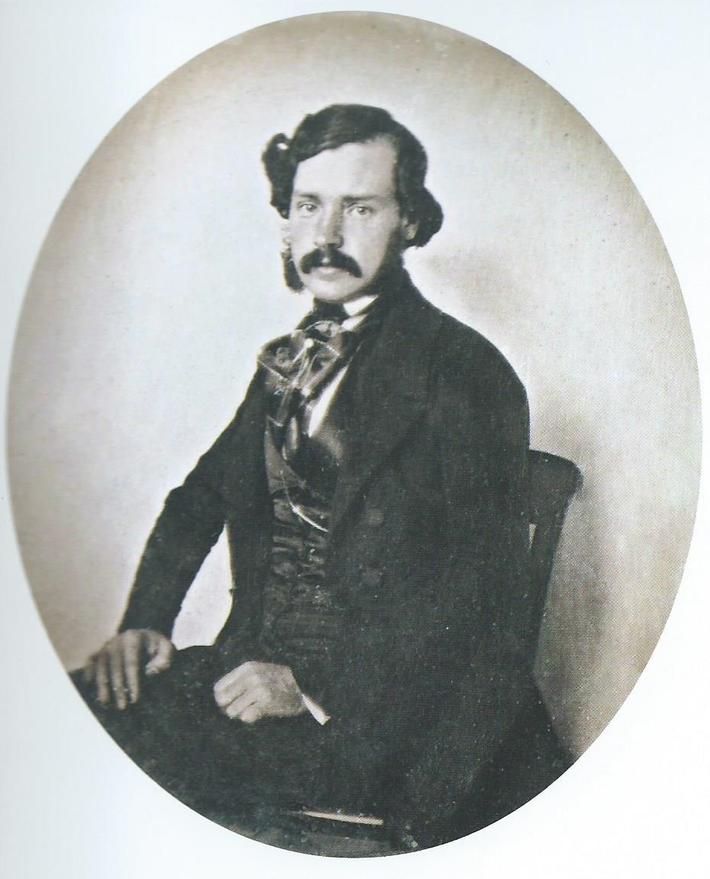 Photograph of an eight gun battery in front of Sevastopol. A wall created from earth and sandbags runs the breadth of the middle ground. Canons are spaced at intervals behind the wall, some with neat piles of cannonballs beside them. Sevastopol can be seen in the distance, the Russian military barracks at the forefront and the harbour to the right.

The first question I asked myself was ‘why was the image described as an eight gun battery when only four guns behind four embrasures were visible in the battery in the picture’? Surely the image would have been better entitled the 4 Gun Battery? Checking contemporary military maps, it quickly became apparent from the background detail in 8 Gun Battery that it was taken looking roughly north-northwest from the British Right Attack on the western slope of the Vorontsov Ridge. When the layout of the trenches in the photograph was compared to maps of the Right Attack, it was discovered that the four guns were in a 4-gun battery known as ‘Battery No. 13’ on the 2nd Parallel trench line. Furthermore, the trench line stretching from right to left in the middle distance was the 3rd Parallel on the British Right Attack. The communication trench joining the 2nd Parallel to the 3rd Parallel is seen on the left of the image. Also, in the left foreground of 8 Gun Battery is a ‘triangle’ of trenches depicted as just 25 metres south-southeast of ‘Battery No. 13’ on maps. This strongly suggested from maps that the photograph was most likely taken from the nearby ‘Battery No. 7’, which carried two 10-inch mortars.

Of great interest is that the position of disturbed earth bank known as ‘the Quarries’ can be clearly seen in 8 Gun Battery above the 3rd Parallel on the far left with a wide and deep trench leading up its slope. This strong point was captured from the Russians by the British on 6 June 1855. Beyond ‘the Quarries’ is the Russian bastion known as the Redan with is curtain wall running down the slope to the right. This is where the four guns in the battery in the foreground of 8 Gun Battery were pointed and was obviously their main target. The Redan was unsuccessfully assaulted twice by the British with great loss of life. The open ground where troops had to charge, some carrying scaling ladders, lies in front of the bastion.

Photographic views of these historically important military positions showing their relationship to each other are not found elsewhere and 8 Gun Battery is therefore a significant image. Also of interest in the photograph is the Central Hill in the city of Sevastopol visible over the Redan. The Church of St Peter and St Paul, which was the subject of my last post to this blog, lies immediately above the curved apex of the salient of the Redan when viewed under high magnification. The Russian military barracks are in the distance on the right of the image with Fort Nicholas to the west of the entrance to the South Harbour directly above the left wing of the first barrack building. Ships are on the roadstead on the far right with the north shore beyond. The Black Sea is on the skyline.

It’s remarkable what can be gleaned from old Crimean War photographs if it is known where they were taken and in which direction. It was also discovered that 8 Gun Battery is the right half of an overlapping panorama with another Robertson/Beato image entitled Valley of the Shadow of Death. The left of the combined panorama picture (below) shows the continuation of the 2nd Parallel to the west-southwest with 'Battery No 12', which carried two 13-inch mortars. The Vorontsov Ravine leading into the flat land at the head of the South Harbour is on the far left.

Why 8 Gun Battery is incorrectly named is not known. British ‘Battery No 9’, which contained eight guns and was called the ‘8-Gun Battery’ in the historical literature also lay like ‘Battery No. 13’ on the Vornotsov Ridge on the 2nd Parallel of the British Right Attack before Sevastopol. However, its 8-inch guns were aimed at the Malakhov bastion. This battery was about 220 metres to the northeast of ‘Battery No. 13’. It was out of view of 8 Gun Battery on top of the slope to the right.

My interest in photographs taken during the Crimean War led me to spend a total of six weeks over two summers in 2011 and 2012 in Sevastopol and its environs. During this period, I endeavoured to find the positions where the landscape images of Roger Fenton, the Robertson/Beato team and Vladislav Klembovsky were taken and reproduce the scenes as they looked today. The photographic results of my visits were presented in a number of Lulu publications, but most notably in The Crimean War: Then and Now published by Frontline/Pen and Sword Books in 2017. Unfortunately, the slopes seen in 8 Gun Battery and Valley of the Shadow of Death are now completely built over with suburban dachas and a modern view looking towards the site of the Redan from ‘Battery No. 7’ is impossible to take at ground level.