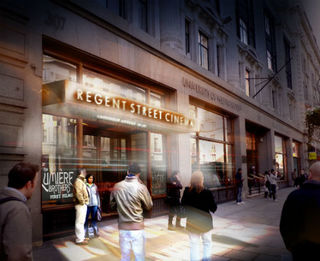 The restoration of the United Kingdom’s first cinema - located in the heart of London’s West End at the University of Westminster in Regent Street – has been given the green light by Westminster City Council, as the campaign to raise funds for the landmark project moves into its next phase.

The Regent Street Cinema is celebrated as the ‘Birthplace of British Cinema’ as it was used by pioneering filmmakers, the Lumière brothers, to perform their first ever moving picture show in the UK on the 21 February, 1896.

The project will see the preservation of the key architectural features of the Cinema from its 1920s heyday, combining the restored fabric with up-to-date technology, bringing it into the 21st century. Once completed, the iconic venue will house a 200-seat auditorium which will be open to the public and become a landmark destination for British film and a lively hub for University of Westminster students and external visitors including the local community and school children who will come to learn about the heritage and evolution of film and cinema. The restored Cinema’s programming will be distinctive and highly informed, combining cutting edge and experimental work with a stimulating mix of the best of current UK, independent  British and World cinema, documentary films, retrospectives and classic repertory titles.

The design scheme for the restoration has been created by Tim Ronalds Architects, a practice that has experience of working with landmark theatre spaces, such as the Hackney Empire redevelopment and plans for Wilton’s Music Hall. Building work will commence in April 2014 and the opening of the Cinema is expected in April 2015.

A major campaign to raise money for the restoration project was publicly launched in March 2012 and the University is seeking additional supporters to be involved in this nationally important project.  To date, the University of Westminster has secured two thirds of the £6 million needed to complete the restoration and reopen the Cinema.  Generous major donors have so far included the Heritage Lottery Fund, Quintin Hogg Trust, Garfield Weston Foundation and Odeon. As part of the wider campaign the University has also secured donations to name over a quarter of the seats in the new Cinema and is aiming to have all 200 named by its supporters well ahead of the Cinema opening.  The University previously received a £1 million donation from the MBI Al Jaber Foundation which was used to bring the Edwardian style Grand Entrance Hall at the Grade II listed campus back to life.

The Cinema project is being backed by some of the biggest names in the British film industry who sit on its advisory board.  Tim Bevan, Co-Chair of Working Title Films (Rush, Les Misérables, Tinker, Tailor, Soldier Spy), Asif Kapadia, film director and alumnus of University of Westminster (Senna, The Warrior, Far North), Paul Trijbits, Producer (Saving Mr. Banks, Jane Eyre, Tamara Drewe), and cinematographer Seamus McGarvey (The Avengers, Anna Karenina, We Need to Talk About Kevin).

Professor Rikki Morgan-Tamosunas, Deputy Vice-Chancellor, University of Westminster, said: “The Cinema holds a unique place in the history of filmmaking and cinema, and it is wonderful to see that 175 years since the founding of our institution, a new and exciting phase in its history will begin.  When it re-opens, the Cinema will offer an outstanding venue in which to nurture future talent as well as provide a place where our students, alumni, industry professionals, and our community can come together and enjoy film and our shared Cinema heritage.”

Asif Kapadia, Film Director and University of Westminster alumnus says “I was proud to study Film, Video and Photographic Arts close to the location of the new Cinema at the Riding House St campus in the mid 90's, at the time we didn't have a dedicated cinema to screen our films. Over the years so many fantastic, iconic cinemas in the UK have closed down or been redeveloped, so this is a marvelous opportunity to restore a venue that played a vital role in the birth of cinema in the UK, and highlights the University’s history of innovation in education and learning. Bringing the Cinema back to life will benefit both current and future students and will provide a platform for independent cinema, short films, documentaries and emerging British talent in the heart of the West-End”

Sandi Toksvig OBE, a supporter of the Regent Street Cinema, says “This is the birthplace of Cinema, where it all started. How fantastic for young people to be able to showcase their work, here, alongside great professionals. This Cinema is a place where we can celebrate not just the past but the future. This is a significant building and it’s wonderful that so many who are passionate about Cinema, the history of film or who have a connection with the heritage and future of the University want to be a part of it.”

The University of Westminster is a leading global centre for excellence in the arts and film production.  The restoration of the Regent Street Cinema reinforces the University’s international reputation for academic and practical teaching which boasts a number of Oscar and BAFTA winners among its alumni. The Act of Killing, Directed by Joshua Oppenheimer - a Reader at the Media, Arts and Design faculty of the University of Westminster - and produced by the University of Westminster's Professor Joram ten Brink, won an award at this year’s BAFTA ceremony for best documentary. University alumnus Yousif Al-Khalifa was also recognised with a BAFTA for co-directing the best British Short Animation film ‘Sleeping with the Fishes’.

Film students from the University will also have the opportunity to showcase their work in the heart of London’s vibrant West-End, which is something that no other University can offer.  The University currently offers three courses which cover contemporary media practice and film and television production and a post-graduate MA in Film and Television.

For more information on the project please visit: www.birthplaceofcinema.com

The Birthplace of British Cinema - Lumière Brothers
The venue was chosen by the Lumière brothers because of the institution’s reputation as a leader in scientific experimentation and entertainment. The Grade II listed building is situated at 309 Regent Street and dates back to 1838.  It was later used by the Polytechnic for a variety of film and theatrical performances and in the lead up to the First World War it was used with Government backing to show “Our Army and Our Navy” films.

More recently it has been used by the University of Westminster as a lecture theatre for students and an exhibition venue for public events.