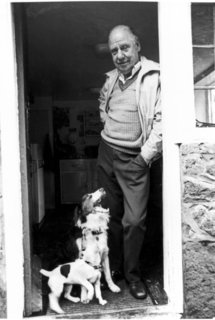 I photographed Bert Hardy, the great Picture Post photojournalist, at the same time as our second-ever interview at his Surrey estate in late November 1981, as per the Hardy's wishes. I only have two remaining photo-portraits of him from among several I took of him that day. My second now ex-wife apparently pilfered in 1987 my 2 rolls of film (one black-and-white, one color) from that shoot. I've a third image taken by me on the Hardy's estate that day, of his dogs Lizzie and Kim playing along a trail by a tree.

I have no negatives from that shoot except three copy-negatives, but do have some vintage prints my early photo-technicians made for me. Mrs. Sheila Hardy, Bert's widow, told me ca. 2005 that she knows I took my portraits of Bert because she said she was there with us at the time they were taken.

In 2003, the Hardy's darkroom manager Charlie Keeble printed for me an archival 6X9 print of Bert leaning in a doorway with his dogs yelping at his feet. Since I asked Mr. Keeble to also print one for the British National Portrait Gallery, he did and offered to deliver it himself to the NPG, which he soon did. It was accepted into the NPG Photographs Collection, ca. Dec. 2003 I believe the NPG documents indicate. That photo-portrait by me is published on the front-cover of my 50,000-word biography of Bert Hardy, 'The Cockney Eye', which I published in early 2013, just-prior to Bert's birth-centennial.

On the day I photographed Bert Hardy, I also photographed a friend of his from the Rank Film Company, a tall man in trench coat and fedora hat wearing eyeglasses who stopped by briefly. I no longer have photos of the Rank man or Mrs. Hardy, but before my negatives of that shoot were pilfered I had quite a few 4X6 prints made in Wisconsin, and sent them to Sheila Hardy.

The three photos I still own from that day (all taken by me) I've published often (online and in print). I believe the British NPG print of Bert and his dogs taken by me has the catalogue number NPGx126230 on it.

Though I've published my other remaining portrait of Bert Hardy many times (of him seated by his living room window with a pen in hand), I don't know that any archive I've offered it to so far has accepted it into its permanent collection. I believe it's a very rich photo portrait. I took it originally in color, but now only have the cropped black-and-white version of it.