Tunbridge Wells Museum and Art Gallery was initially approached by the National Gallery of Art, Washington, who were keen to borrow the photograph ‘The Lady of Shalott’ by Henry Peach Robinson. The photograph is required for an exhibition called ‘The Pre-Raphaelite Lens: British photography and painting, 1848-1875’ which will be on show in Washington from October 2010 to January 2011. It will then tour to Paris where it will be on show at the Musee d’Orsay until May 2011.

An expert representing the National Gallery of Washington has also been to visit the Museum to see the ‘Lady of Shalott’ first hand, and she declared it to be ‘an exquisite print’.

The Lady of Shallott (1861) is one of Henry Peach Robinson’s most beautiful and effective ‘combination prints’ – a photo constructed of several different negatives. The scene, illustrating the poem by Tennyson shows the Lady of Shalott floating down the river to her death. It echoes the painting of Robinson’s contemporaries – the Pre-Raphaelite Brotherhood, not just in its subject matter and romantic tone but also in its obsessive detailing of the natural world. 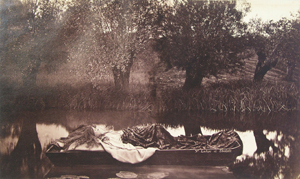 Thanks. Glad you liked the image as Robinson is certainly ahead of his time. Enjoy too, the blogs submitted by fellow members, and look forward to reading yours too in the not too distant future!

you never fail to amaze me with the stuff you are able to blod michael .

this is such an amazing and unique picture . im getting my work to

print this for me in a 2m x 1m banner which ima hang in my room .

so much value it carries that its hard to explain to be honest .

i saw this image once on a fence mesh banners melbourne

it was quite a vivid quality but i think it would have been altered .