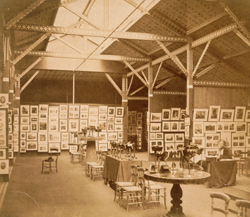 A section of the new display will look at the first ever exhibiton of photographs held in a museum, which took place in 1858 at the then South Kensington Museum (now known as the V&A). On show will be the earliest known photograph of a photography exhibition next to three works that can be seen in the 1858 picture. There will also be a selection of photographs that were either included in the 1858 exhibtion or are variations of works that were. The works will be hung in a tightly packed arrangement to evoke the style of a 19th century installation.

The rest of the gallery will tell the story of modern and contemporary photography from 1900 to today and will include works by well-known photographers such as Edward Steichen, Alfred Stieglitz, Cecil Beaton, Robert Frank and Diane Arbus. These will appear alongside new acquisitions by internationally recognised artists such as Thomas Ruff, Wang Qingsong, Philip-Lorca diCorcia, Jeremy Deller and Alan Kane and young British photographers like Sarah Pickering.

The V&A began acquiring photographs in 1852 and is now the home of the national collection of the art of photography. The collection is one of the largest and most important in the world and is international in scope, ranging from the beginnings of photography to the present day. The current Photography Gallery opened in 2003 and is re-hung annually.

To celebrate the re-hang, the V&A is dedicating a Friday Late event to photography. Taking place on 29 May 2009, Friday Late: Flash! will include talks by photographers such as Jem Southam and Sarah Pickering and behind-the-scenes tours of the V&A’s photography collection. Portrait studios for visitors to have their picture taken have been specially commissioned for the event.