One of the great pleasures in collecting old negatives is finding the odd 'ruby in a mountain of rock'. Whilst recently scanning a group of glass negatives I had recently purchased and had loosely titled 'Camberwell, Southwark and Richmond Collection' I came across the image of a middle-aged gentleman sitting with a young girl in the back garden of a house somewhere in the outskirts of London.

A not uncommon picture of Edwardian life found in similar collections of informal middle-class family portraits, but for some reason this gentleman looked familiar. A quick look at the list of captions found on the inside of the negative box lid revealed that the subjects were, 'Mr Cobham & Vera with hat', dated May 27th, 1906.

I instantly recognised him to be Sir Alan Cobham, the intrepid aviator and entrepreneur, but then immediately realised that it couldn't be him as he would surely have been a much younger man than the one in my picture, taken in 1906. A quick check on the internet of images of Sir Alan indicated that he did indeed resemble the image of the man in my negative, and after further research it turned out that the man in the garden was Frederick Cobham, father of Alan, so the young girl must have been Vera, Alan's younger sister.

I subsequently discovered further images of the Cobham family in the collection, including the one attached of the whole family, with dog. Possibly this has been published before, but I would doubt it. I haven't been able to ascertain who took the photograph but I am currently researching the collection, so hopefully I will discover their identity, or at least the name of the family at whose residence the Cobhams visited in the late spring of 1906. 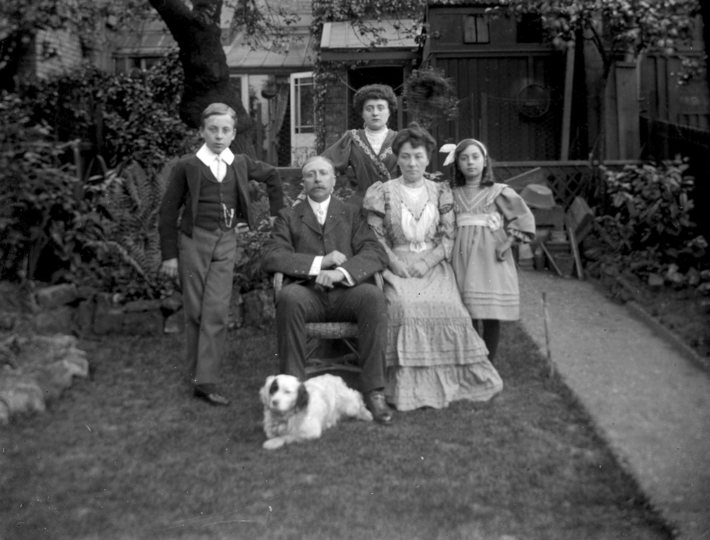 Little could any of them have known then, just how this young boy would begin to influence the development of commercial aviation some 15 or 20 years hence.