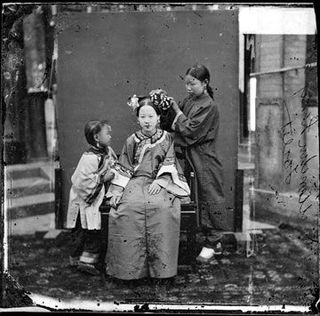 CHINA: Through the Lens of John Thomson 1868-1872 is an historic photographic exhibition including 150 images taken in China between 1868 and 1872. The exhibition includes a wide variety of images, themes and locations in China from Beijing to Fujian to Guangdong including landscapes, people, architecture, domestic and street scenes.  The show in Beijing is accompanied by several displays of original clothes from the era.

John Thomson (1837–1921) was born in Edinburgh two years before the invention of the daguerreotype was announced to the world in 1839. This discovery was the beginning of photography. That same year Fox Talbot introduced the calotype process, and with this new medium David Octavius Hill and Robert Adamson, two remarkable Scottish photographers living in Edinburgh, produced nearly 3,000 images, including city views, landscapes and scenes of everyday life. Their work undoubtedly had a profound influence on Thomson. In the years leading up to Thomson becoming a professional photographer, the technology of photography also developed at an incredible speed. The invention of the wet-collodian process in 1850 is regarded as the watershed: it reduced the exposure time and the cost of making photographs; it also produced sharper images. The wet-collodian process quickly replaced daguerreotype and calotype. As Thomson remarked: ‘the detail in wet-collodian negatives was of microscopic minuteness whilst presenting the finest gradation and printing quality which had never indeed been surpassed by any known method’. But this in itself added to his difficulties: it was necessary to make the negatives on glass plates that had to be coated with wet-collodian emulsion before the exposure was made, thus there was a large amount of cumbersome equipment that had to be carried from place to place.


Yet what marked Thomson’s work out was not simply the massive amount of visual information he offered. His uniqueness was his zeal to present a faithful and precise, though not always agreeable, account of China and Chinese people. He wanted his audiences to witness China’s floods, famines, pestilences and civil wars; but even more so, he wanted share them the human aspect of life in China. He wanted his work to transcend that of the casual illustration of idiosyncratic types, to portray human beings as individuals full of peculiarities.

In 1920, Thomson decided to sell his 650 glass negatives, including those of China, to the Wellcome Historical Medical Museum, but died before the transaction could be completed. Eventually Henry Solomon Wellcome (1853–1936), the American-born pharmacist and philanthropist, bought the negatives from Thomson’s heirs.

The 150 images included in this exhibition are all from the Wellcome Library’s collection. While a few images were reproduced in Thomson’s published works and shown in exhibitions, the great majority of his photographs have never been exhibited.

First shown in Beijing, the exhibit made its way to Liverpool last year before heading to Thomson's native Scotland next month. Details of the exhibition can be found here, and a BPH blog here.

Photo:  A Manchu lady after having her face painted, Beijing 1871-2. © The Wellcome Library, London